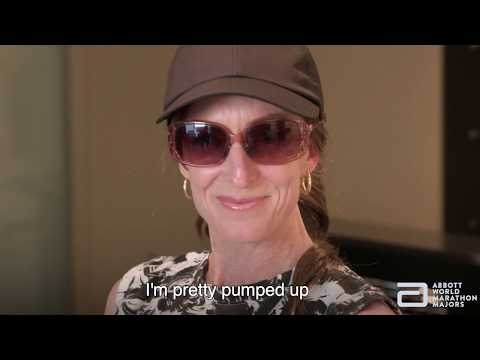 For the past few years I've been leading weekly speed workouts on the Concordia University Chicago track for the Oak Park Runners Club. A few club members are even calling me "coach."

In early August, Geri Bensen, VP of the Oak Park Runners and spouse of club Prez Nick Bensen, got a call from Chicago Marathon Director, Carey Pinkowski, saying that the Abbott Marathon Majors organization (which includes the Chicago Marathon) wanted to film a local running club in a typical workout. Were we willing to participate, and could we obtain permission from the university? And by the way, they wanted to add a special gimmick.

That would be Deena Kastor -- showing up unannounced, in disguise, to participate in the workout. Deena Kastor is an Olympic marathon medalist (Athens, 2004), winner of the 2005 Chicago Marathon and winner of the 2006 London Marathon in an American record time of 2 hours, 19 minutes. She is now competing as a masters runner (over 40) and holds the world female masters marathon record, set here in Chicago in 2015. She's a running legend. To list all her records and wins would fill up this page.

I contacted Concordia Athletic Director, Pete Gnan, to see if we could use the track on the evening of Wednesday, August 21. He wasn't familiar with Deena's name, but admitted that track and cross-country weren't his area of expertise. However in our next communication he said that his coaches were very aware of who she is. So permission was granted and the university reserved the track for that evening after football practice.

Geri and Nick Bensen worked to generate additional club participation in the workout, saying that there would be a film crew on hand – but keeping our celebrity guest secret.  The afternoon of the event I attended a preliminary planning meeting and met Deena – a very pleasant and down-to-earth lady with a great sense of humor. I outlined the evening's planned workout – a "pyramid" (or ladder) consisting of 400 meters (one lap), 800 meters, 1200 meters, 1600 meters, and back down to 400 meters – with short rests between each repetition.

It was suggested that she would show up as a new club member named Michelle, who would jog along at the back of the pack before cranking things up. She also selected her disguise, including a choice of wigs, some unflattering running attire and sunglasses. She would also be wearing a microphone to record casual conversation with other runners.

That evening the workout group assembled, noting the obvious presence of the film crew. Saying she was a new club member, "Michelle" walked in without attracting any undue attention and the workout started. I was figuring that she would run somewhere near the middle of the pack since I usually divide the runners into a faster group and a slower group after the first repetition or two, but Deena was way at the end of the parade.

How was I going to get her into Group One?

As we started the 1200 meters (three laps), she jogged through the first two laps and completely sat out the third, acting like she was exhausted. Then for the 1600 meters I called for Group One to get ready, and she walked up to the line. A few asked if she was sure she wanted to be in the faster group, and she said she would try. There was some head-shaking among the other runners.

And of course, this was where the real Deena Kastor showed her stuff. Drew Mullen, our fastest runner, was having a good night, but Deena was right on his shoulder. The spectators were amazed, still not recognizing her. One of our guys finally realized who she was, but most still didn't have a clue, amazed that this unknown newcomer was passing our fastest guy. This was exactly what the film crew was looking for; our runners were buzzing with amazement.

When the workout was over I announced who Michelle really was, and there was lots of laughter and applause, plus individual and group photos. She also greeted the Concordia coaches and women's cross country team who had been watching the workout from the sideline.

The video was released a few days later. It's on World Marathon Majors Facebook page.

So, Deena Kastor is welcome to fly in from California to join our workouts any time she wants.

Group One for sure.

Robert A. Bell from Oak Park

This story is excellent and the video of Deena Kaster with the unsuspecting Oak Park Runners Club members is total hilarity, skillfully edited, a must watch! Do not miss it

It seems obvious that Anthony Clark resides in Oak...